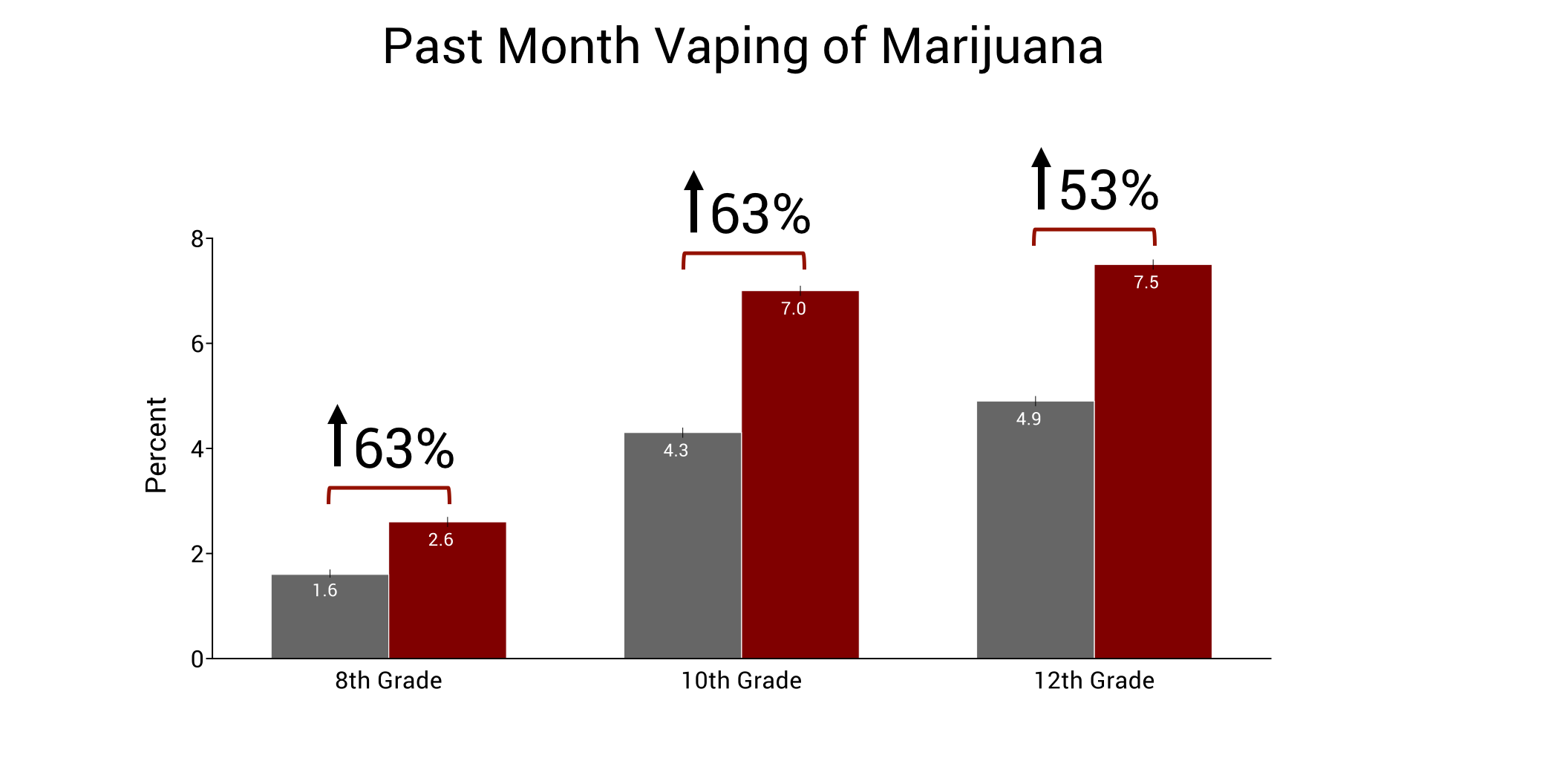 Tenth grade marijuana use up 10% versus two years ago; vaping marijuana is up more than fifty percent among all age groups; edibles remain popular

In the past few years, marijuana use is up significantly, by 10%, among 10th graders, and current vaping of marijuana is up 63% for eighth and tenth graders and 53% for twelfth graders, according to new numbers from the largest drug use survey in the United States. The 2018 Monitoring the Future survey, compiled by researchers at the University of Michigan and funded by the National Institutes of Health, is the benchmark for student drug use in the United States.

Over the past two years, marijuana use among tenth graders rose 10%, a significant increase. Additionally, despite common belief that nicotine use among youth is down, nicotine vaping rose 87% on average across all age groups.

“The marijuana industry’s efforts to glamorize and normalize marijuana appears to be working. After a decline in use, marijuana use is on the rise again over the past few years, particularly among 10th graders, and especially with respect to vaping,” said Dr. Kevin Sabet, president and founder of Smart Approaches to Marijuana, and a former three-time White House drug policy advisor. “And today’s marijuana isn’t what it used to be: THC levels can be 50 times higher than in the past, especially when vaped. We call on regulators to stop the sales of 99% THC vapes and edibles, the two most likely modes of administration after smoking, and to press pause on further proposals to commercialize THC.”

In addition, the study found that the percentage of youth who say they would use marijuana if it was legal has increased, and that 12th graders admitting to driving after using marijuana is significantly higher. Marijuana use has been known to more than double the chance of being in a car crash.

“The commercialization of the marijuana industry and its partnership with groups such as Juul and other Big Tobacco organizations like Altria is now cultivating youth-friendly methods of use, as evidenced by the huge increases in marijuana vaping rates. Legalization today is about enriching Big Tobacco, plain and simple.”

Today’s marijuana is especially harmful to adolescents and is known to have a whole host of damaging effects on developing brains. Adolescent marijuana use severely impacts the ability of our youth to learn, greatly increases the risk of serious mental illness, impairs memory, and can even result in a loss of up to eight IQ points.

Smart Approaches to Marijuana (SAM) is a nonpartisan, non-profit alliance of physicians, policy makers, prevention workers, treatment and recovery professionals, scientists, and other concerned citizens opposed to marijuana legalization who want health and scientific evidence to guide marijuana policies. SAM has affiliates in more than 30 states.

Evidence shows that marijuana - which has skyrocketed in average potency over the past decades -  is addictive and harmful to the human brain especially when used by adolescents. In states that have already legalized the drug, there has been an increase in drugged driving crashes, youth marijuana use, and costs that far outweigh pot revenues.These states have seen a black market that continues to thrive, a black market that continues to thrive, sustained disparities in marijuana arrest rates, and tobacco company investment in marijuana.

For more information about marijuana use and its effects, visit www.learnaboutsam.org.

Will County Illinois
This email address is being protected from spambots. You need JavaScript enabled to view it.

BY Will County sheriff's office